There were a significant number of people of colour in eighteenth-century Britain. Most were African or of African descent, while a smaller number were South Asian and a few were indigenous Americans. Many had been brought by their masters from Africa, the Caribbean, North America and South Asia, usually to work as domestic servants, but sometimes as craftsmen or as sailors. A few were free, others were legally bound to work for their masters for set periods, and some were enslaved. Britons who traded with or spent time in the colonies were well used to referring to both South Asians and indigenous Americans as ‘Indians’ and while some advertisements make clear the place of origin of the person described, others are far less clear.


We have shown the rough location of nine runaway advertisements and three for sale notices, to swiftly convey the range of locations the sources mention. We hope to add more in the future. Click on the images to see a picture of the original advertisement, alongside a transcription and source.

Many of these people resisted their condition by seeking to escape, which in turn prompted some masters to place advertisements in newspapers describing the 'runaways' and offering rewards for their apprehension and return. This project is based upon extensive and painstaking research into dozens of Scottish and English newspapers to locate such advertisements. While a few of these newspapers have been digitized, the quality of the original print and scans (often of microfilm) is such that digital text searching misses as much as it finds, so our research has involved combing through tens of thousands of pages of newspapers in order to find runaway advertisements like the two reproduced below.

Not all of these advertisements refer to enslaved people, and some were lost or had perhaps been kidnapped. (It was extremely unusual for white servants to be kidnapped, and the possible capture of servants of colour or slaves suggests that captors might be interested in selling the people they had taken). Yet in their objectification of the bodies of people of colour, these advertisements—whether for enslaved or nominally free people—more closely follow the format of American and Caribbean runaway slave advertisements than they do the notices placed by English and Scottish masters of white servants and apprentices who had eloped. Taken together the advertisements presented on this website provide compelling evidence of the presence of a great many bound and enslaved people of colour in Britain during the first three-quarters of the eighteenth century. It is likely that a great many — perhaps most — masters did not place newspaper advertisements if their enslaved or bound servants escaped; moreover, it is extremely likely that most of these enslaved or bound servants never attempted escape. Historians have estimated that in mid-eighteenth-century Jamaica less than 2% of the enslaved population attempted permanent escape each year, and although the proportion of runaways was higher in North America it still constituted only a small minority of enslaved people. Thus, even allowing for the fact that a higher proportion of enslaved and bound people may have attempted escape in Britain, it is nonetheless true that the more than eight hundred runaway advertisements in this database represent no more than a small proportion of the total number of enslaved and bound people of colour who spent time in Britain between 1700 and 1780. 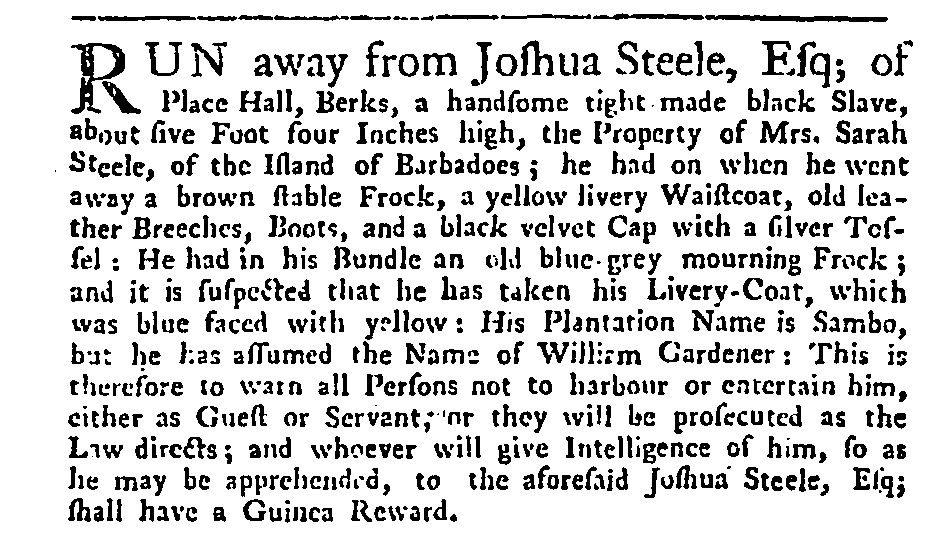 Moreover, advertisements for escapees and for the buying and selling of people provide telling evidence that holding people of different races in slavery or fixed terms of servitude was routine and unremarkable in eighteenth-century Britain. Slavery was not simply an institution that existed in Britain’s colonies: it existed in the towns and countryside of the British Isles and, while hardly common, slaves and bound people were present and visible in Georgian Britain. The fact that a master did not hesitate to publicly advertise a person for sale, or to place an announcement promising a reward for the recapture and return of an enslaved person in newspapers read by friends and neighbours all indicates that such behaviour was unproblematic. Increasing popular concern about slavery and then the rise of a movement in support of abolition of the Transatlantic Slave Trade only began to develop in Britain during the final quarter of the eighteenth century.

Without doubt enslavement in Britain and in the Americas was very different. Most enslaved people in Jamaica, for example, were engaged in plantation agriculture, a horrific labour regime which — together with insufficient food, a dangerous disease environment and the violent rule of the planters — resulted in horrendous and short lives for the enslaved. Yet better working conditions in Britain should not blind us to the fact that many of these people had been stripped away from family and community, a traumatic event for all who endured it but particularly for the many children recorded in this project’s database. The material gleaned from British newspapers, with further evidence from fiction, correspondence and other sources from the time all indicate that many of the enslaved and bound people brought to Britain worked in the houses of wealthy masters and mistresses as servants. In comparison with the enslaved across the Atlantic these people in Britain were usually quite well housed, clothed and fed. However, for people who had endured enslavement in South Asia, or racial slavery in the Americas and perhaps the horrific Middle Passage aboard slave ships from Africa, it must have been extremely difficult to regard one’s position in Britain as being fully and finally safe and free. Return to the colonies must have been an ever-present and terrifying threat hanging over the heads of many of these people.

For example, Jamie Montgomery had been in Scotland for five years when he escaped, during which time he had become a skilled carpenter and joined a church. Yet a master who still referred to Jamie as his ‘Virginia born slave’ determined to send the young man back to the American colonies and sell him, which prompted Jamie’s unsuccessful bid for freedom.(1) Similarly, the ‘for sale’ advertisement above indicates that if the unnamed nine-year-old boy was not purchased his master would return him to the West Indies. When Robert Graham returned from Jamaica in 1771 he brought back with him an enslaved man named Martin. Two years later, after complaining that Martin had proved himself ‘too lively and sprightly’, Graham sent the man back to Jamaica with instructions that he be sold ‘to the best advantage. I was offered £100 for him before I left Jamaica, and I think he is now worth a good deal more.’(2) In short, masters and mistresses could and did take or send their bound and enslaved servants back to the colonies where they could easily be reintegrated into slave society, often at a healthy profit for their owners. Until the 1770s there are no examples of black people successfully challenging in court their masters’ and mistresses’ right to do this. Unless they possessed papers proving their status as free people, bound and enslaved people in Britain were always vulnerable to such treatment. One newspaper reported that when a ‘Negroe Servant’ was ‘threatened by his Master, for some Misconduct, to be sent to the Plantations,’ the threat was real and horrifying enough for the man to hang himself in his owner’s coal cellar.(3) While their material situation may well have been better than that of many enslaved people in Britain’s colonies, bound and enslaved people in Britain were nonetheless only one sale or move away from a return to the horrors of New World bondage.

In many cases the short newspaper advertisements collected for the ‘Runaway Slaves in Britain’ project constitute the only remaining evidence of the lives and existence of the bound or enslaved person mentioned. The men, women and children who ran away in an attempt to free themselves inadvertently generated records of themselves, providing remarkable sources which can tell us much about them and their lives. To the enslaved flight represented one of the greatest acts of self-determination, and in Britain some of these escapes led to court cases which came to define whether or not slavery was legal on first English, and then Scottish shores. 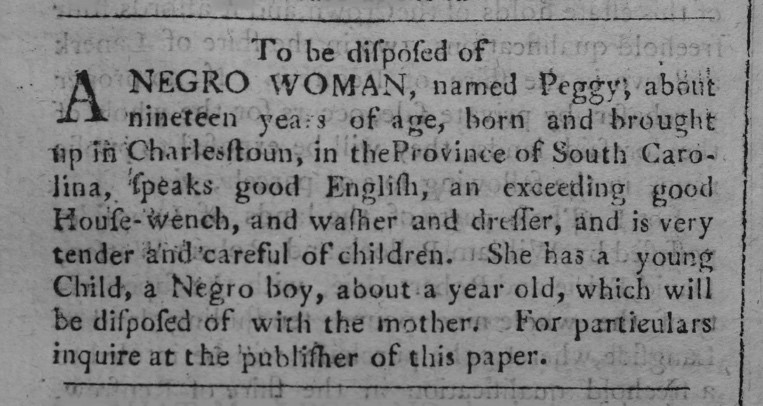 For slave-owners, however, running away was a personal affront, a dereliction of duty and a significant theft of valuable property. Many masters and mistresses felt that they had shown special consideration to the enslaved people they brought to Britain by removing them from the horrors of the plantations and giving them better jobs and working conditions in Britain. In return for what these masters and mistresses regarded as their own great kindness they expected the gratitude and obedience of these unfree servants. Eager to recapture their valuable human property, masters placed advertisements in newspapers offering rewards for the capture and return of the escapee. In these newspaper advertisements they described the physical characteristics, mannerisms, habits, skills and inclinations of people who are otherwise all but completely absent from historical records. The result is that “runaway slave” advertisements are a rich source of information about the enslaved and slavery in eighteenth-century Britain. The database and related sources available on this website will allow researchers to explore and interrogate this information, allowing us to learn more about the enslaved and bound people who lived, worked and sometimes sought freedom in eighteenth-century Britain. 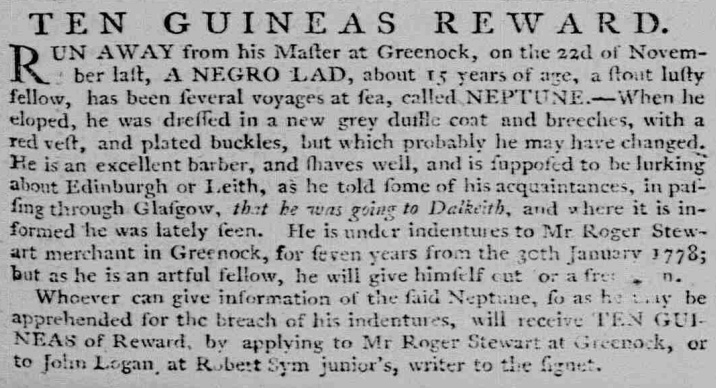