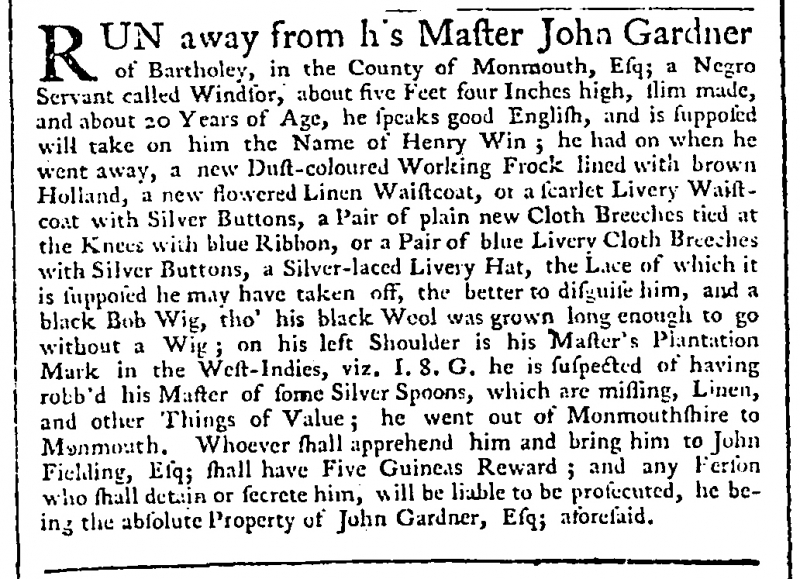 RUN away from h[i]s Master John Gardner of Bartholey, in the County of Monmouth, Esq; A Negro Servant called Windsor, about five Feet four Inches high, slim made, and about 20 Years of Age, he speaks good English, and is supposed will take on him the Name of Henry Win; he had on when he went away, a new Dust-coloured Working Frock lined with brown Holland, a new flowered Linen Waistcoat, or a scarlet Livery Waistcoat with Silver Buttons, a Pair of plain new Cloth Breeches tied at the Knees with blue Ribbon, or a Pair of blue Livery Cloth Breeches with Silver Buttons, a Silver-laced Livery hat, the Lace of which it is supposed he may have taken off, the better to disguise him, and a black Bob Wig, tho’ his black Wool was grown long enough to go without a Wig; on his left Shoulder is his Master’s Plantation Mark in the West-Indies, viz. I.8.G. he is suspected of having robb’d his Master of some Silver Spoons, which are missing, Linen, and other Things of Value; he went out of Monmouthshire to Monmouth. Whoever shall apprehend him and bring him to John Fielding, Esq; shall have Five Guineas Reward; and any Person who shall detain or secrete him, will be liable to be prosecuted, he being the absolute Property of John Gardner, Esq; aforesaid.