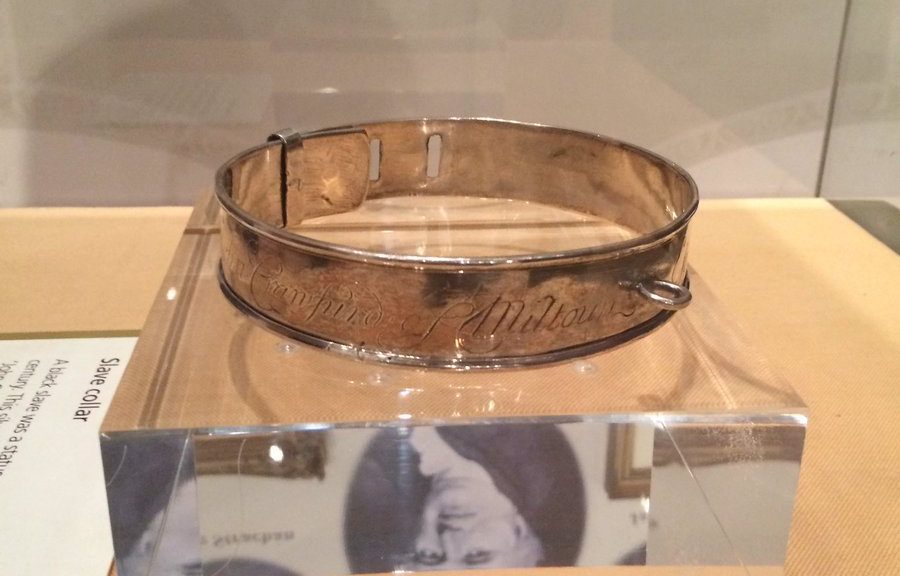 I’ve been working with Glasgow Museums on the ‘Hidden Legacies’ project and we spent an enjoyable afternoon taking a tour through imperial Glasgow exploring the city’s historical connections with New World slavery. The city’s imperial connections have been historically celebrated in George Square, home to many statues of imperialists as well as the City Chambers. Built between 1882 and 1888, the City Chambers is civic demonstration of Glasgow’s claim to be the ‘Second City of Empire’. Looking closely at the triangular facade on the front of the City Chambers, Queen Victoria sits atop a series of native peoples bringing gifts: the subservient role of the colonies inscribed into the city’s architecture. Above the triangular façade celebrating imperial exploitation, three statues that symbolise truth, justice and liberty hint at the hypocrisy of the imperial mentalité. The City Chambers’ architecture, therefore, reflects  Glasgow’s status as one of the most prominent port cities of the Second British Empire. The city was part of a wider imperial network – based on New World slavery – that connected North America and the Caribbean with Scotland at least from the 1620s to 1838. However, there has been no adequate explanation of the nation’s spectacular rise from one of the poorest nations in western Europe after Darien fiasco in the mid-1690s to nineteenth-century industrial powerhouse. Capital derived from exploitative and usurious activities in America, the West and East Indies all played a role. Although Scotland had limited involvement with direct slave trade voyages (known as the ‘triangular trade’) and there were only 31 recorded between 1706 and 1766, the merchants of Glasgow traded in slave-grown produce. In effect, the merchants cut out the Africa leg of the triangular trade and went directly to the plantations. In this way, Glasgow merchants came to monopolise the trade in tobacco and sugar, although the latter to a much lesser extent. This article examines the city’s connections with New World slavery through the urban heritage, focusing on the men who made it possible: Virginia merchants, known as ‘the Tobacco Lords’ and West India merchants, known as ‘the Sugar Aristocracy’.

From George Square we travel south-west into the ‘Merchant City’. The Cuninghame Mansion – now The Gallery of Modern Art – was built by William Cuninghame, one of the four main ‘Tobacco Lords’ during Glasgow’s ‘golden age of tobacco’, 1740-1790. Completed in 1778 and built in the Palladian style of architecture, it was described at the time as one of the most fantastic houses in the west of Scotland. The core of the mansion became the Royal Exchange in 1827-29. Across to Ingram Street and further south, we arrive at Tobacco Merchants House which is located at 42 Miller Street (laid out in the 1750s). Tobacco Merchants House illustrates the living conditions of a ‘Tobacco Laird’, a colonial merchant lower down the economic rung from the elite ‘Tobacco Lords’. Built in a Palladian style and completed in 1775, Tobacco Merchants House is the oldest surviving building in the ‘Merchant City’ which also underlines little remains of Georgian Glasgow and the city centre is almost all Victoriana.

From the bottom of Miller street, we arrive onto the main thoroughfare, Argyle Street, and travel into the heart of mercantile Glasgow. Arriving at the Trongate (passing the site
of two now demolished Palladian townhouses, the Shawfield and Virginia Mansions), the Tolboth Steeple is a reminder of the once bustling commercial centre. This was the site of the Tontine Rooms (which sat next to the Tolbooth Steeple) which served as the social and commercial headquarters of mercantile Glasgow. The city’s first paved street was located outside the Tontine Rooms and this was where the ‘Tobacco Lords’ convened. Resplendent in their scarlet cloaks, scarlet cloaks and gold-tipped canes, these tobacco merchants bestowed upon themselves the regal sobriquets: ‘Princes of the Pavement’ and ‘Tobacco Lords’. Here they might have discussed the price of slaves in Africa, the growing conditions of tobacco in Virginia, the sugar crop in Jamaica and the tobacco market in France. This was the rise of early-modern capitalism in the west of Scotland based on the exploitation of enslaved labour. And make no mistake, the ‘Tobacco Lords’ were fearsome capitalist competitors who monopolised the trade in slave-grown tobacco from Virginia, which was shipped to Europe (especially France) via Glasgow. From the Trongate, we walk down to St Andrews in the Square. Presbyterian ‘Tobacco Lords’ attended to their spiritual needs and the Kirk was constructed between 1739-1756. The interior is an exemplar of mercantile splendour: the salubrious surroundings (now restored to their former glory) are enhanced by the mahogany imported from the Spanish West Indies. Further south, we arrive at St Andrews by the Green completed in 1751-2. This was the worshipping place of the Episcopalian faction of the ‘Tobacco Lords’: Presbyterians looked down on their mode of worship which involved organ-playing during services, which led to the pejorative nickname the ‘Whistling Kirk’ for St Andrews by the Green. The establishment of the Whistling Kirk was inextricably associated with Richard and Alexander Oswald, Caithness merchants who established a mercantile dynasty in Glasgow from the 1710s. The slave collar owned by John Crawford reveals that Scots used instruments of subjugation (most likely worn by enslaved people) in Scotland. This was not a unique case and there are other records providing more detail. The People’s Palace also holds the Glassford Family portrait which was painted in 1767 by Archibald McLauchlan of the Foulis Academy (associated with Old College, now the University of Glasgow). It features John Glassford – one of the four main ‘Tobacco Lords’ in Glasgow – and his family located within The Shawfield Mansion, the prototype colonial townhouse in the ‘Merchant City’ which was built in 1711. On Glassford’s right hand shoulder, there is a young black child, evidently a page-boy who had been brought over the colonies. Given Glassford’s strong connections with Virginia (and his agent Neil Jamieson was involved with slave-trading in North America) we can make assumptions about the boy’s origins. However, we know little of his life. It was assumed until fairly recently that the young child had been painted out from the painting in the abolitionist period, although a restorative project in 2007 revealed the young child had not been painted out, but in fact dirt and grime built up over the years and partially obscuring the child from view. Glasgow’s full role in New World slavery can be viewed metaphorically in the painting: it has always been present, yet obscured from our view. Although the fate of the young black child in the Glassford painting is unknown, we have records for some others, many of whom ran away from their masters.

The Runaway Slaves project at the University of Glasgow is uncovering new details about the black population of Scotland and England during the period 1700-1780. In Scotland, there are only around 70-100 recorded black people during this period. Many ran away thus inadvertently generating details of their lives particularly through newspapers in which masters placed what were essentially lost property adverts. There are also three famous court cases: Jamie Montgomery (1756), David Spens (1769-1770) and Joseph Knight (1774-1778) which provide further details. Many resisted and rebelled against oppressive conditions in Scotland and flight was one means to do this. This article has traced locations where the ‘Tobacco Lords’ and ‘Sugar Aristocracy’ worked, lived, worshipped, convened. Some were personal slaveowners and young children would have been brought here in the 1760s. As I thought over the concept of a ‘Slave Merchant City’, I stumbled on the city’s booster slogan ‘People Make Glasgow’. And I instantly agreed. Yes, yes they did.

Postdoctoral Researcher on the project